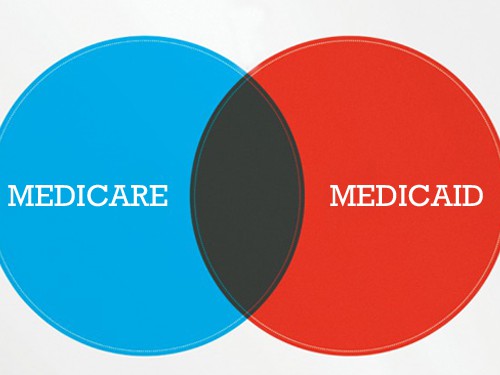 Medicare and Medicaid are commonly confused for one another. The fact is that they’re both government programs involved with healthcare also further confuses people. Both Medicare and Medicaid differ in regards to the people they cover, their funding and how they’re governed by the state and/or federal government. Although these healthcare-related programs serve different purposes for Americans, they’re considered a necessity for low to middle income workers in need of healthcare.

Medicare is primarily an insurance program. The program involves patients deferring payments to trust funds while they are working full time, which cover their medical bills once they retire.

This program mainly covers people over age 65 at any income level; younger disabled holders and other patients, like dialysis patients, are also covered by the program.

Patients are required to pay a portion of their costs through deductibles for hospital and other related costs. Smaller monthly premiums are also required for other types of coverage. The program is run by the Centers for Medicare & Medicaid Services, a federal government agency. As a federally run program, its standards remain constant across the United States.

Medicare may require payment or co-payments for deductibles against certain services provided to beneficiaries. The program reserves the right to refuse to pay for treatments otherwise considered unnecessary.

Medicaid is primarily an assistance program for low income individuals and/or families. The program helps pay medical bills via state, federal and local tax funds. Patients under the program usually aren’t required to pay any part of the costs for their covered medical expenses.

As a federal state assistance program, it can vary across states. State and local governments run this program according to their federally imposed guidelines.

Low income individuals and families of any age are eligible for receiving Medicaid. The eligibility criteria, however, is considered strict, varying on a state by state basis. Beneficiaries of this program must hold less than $1,000 USD in liquid assets. The income restriction, too, varies by state. As an example, New York residents who earn less than $700 per month are eligible.

Some states require beneficiaries to pay their healthcare or other provider a ‘co-payment,’ usually up to $30 per month or a one-time payment upon receiving medical-related services. People who qualify for both Medicare and Medicaid are known as ‘dual eligible’ beneficiaries. If they qualify and subsequently enroll in both programs, they might be able to have both programs work together to cover most of their healthcare costs.